According to Hansard, Barrie MP Patrick Brown did not participate in any of the votes in the House of Commons on February 8, 2012.

There were no recorded votes in the House of Commons on February 9 or 10.

Minutes of the February 9, 2012 meeting of the House of Commons Standing Committee on Health indicate that Patrick Brown, a member of that committee, did not attend the meeting.

"Rita, I was interested in your presentation as well. I'm sorry that Patrick wasn't here; I know he has developed some mobile applications as well, although not, I believe, at the same level as what you're looking at."


The reason for Mr. Brown not attending the meeting and lending his experience using mobile apps to the committee's study of 'health promotion and disease prevention'?

He was at the Wayne Gretzky hockey fantasy camp in Las Vegas, just as he would be again when Parliament resumed in January of 2013.

According to Wayne Gretzky's web site, the games of his 2012 hockey fantasy camp took place on February 9, 10 and 11.

The team rosters for the 2012 fantasy camp show Brown's name on the roster of 'Team C', coached by Walter Gretzky. 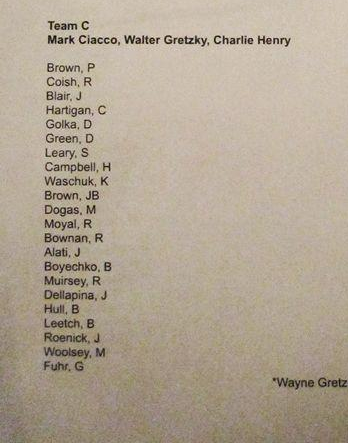