Patrick Brown has accepted over $57,000 in travel gifts since becoming Barrie's MP

Section 14 of the Conflict of Interest Code for Members of the House of Commons prohibits MPs from accepting gifts:

Neither a Member nor any member of a Member’s family shall accept, directly or indirectly, any gift or other benefit, except compensation authorized by law, that might reasonably be seen to have been given to influence the Member in the exercise of a duty or function of his or her office.


One exception to this prohibition is 'sponsored travel', which the code defines as travel that is 'not wholly or substantially paid from the Consolidated Revenue Fund or by the Member personally, his or her political party or any interparliamentary association or friendship group recognized by the House'.

Since the code requires that sponsored travel be reported to the Conflict of Interest and Ethics Commissioner, we have a record of the travel gifts Barrie's MP, Patrick Brown, has accepted:

One of the sponsors of Brown's trips, Snover Dhillon, made headlines during the 2011 federal election campaign when he was noticed sitting behind the Harper family at a Conservative Party rally despite facing criminal fraud charges:

SNOVER DHILLON – NOT REGISTERED
On April 16, 2012, Snover Dhillon pled guilty to one (1) count of performing the functions of a brokerage while not registered as a brokerage and was fined $7,000.  Mr. Dhillon was also previously criminally convicted arising from related circumstances and served 41 days incarceration, 36 months on probation and fined $14,000.

In an April 11, 2011 article in the local media, Brown acknowledged that Dhillon sponsored his 2007 trip to India:

“I have gone to India with the Canada India Foundation, the Canadian Friends of Gujarat, with the Prime Minister of Canada and yes, I went in 2007 with the Indo Canadian Peace Alliance.


However, a Globe and Mail article states that Brown met with Dhillon in India in January of 2011 and a travel receipt included in the supporting documentation for Brown's sponsored trip to India in January 2011 has the words "INDO CANADIAN Peace Alliance" hand-written on it, suggesting Dhillon may have payed for at least part of that trip.

According to Globe and Mail article, Brown and Dhillon were described as friends by 'Conservative sources' and if Facebook is any indication, the two still appear to be friends: 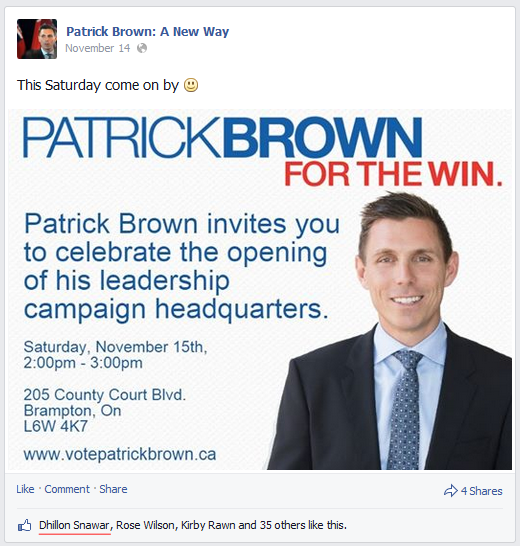 Now that Brown is seeking the leadership of the Progressive Conservative Party of Ontario he might want to try a bit harder to distance himself from someone whom the province's financial watchdog is warning the public about. (Note: the website of the Financial Services Commission of Ontario will be down for maintenance until 12pm on December 6th.)

Although Patrick Brown's Public Statement of Sponsored Travel for his 2014 sponsored trip lists only Vietnam as his destination and January 13th and January 19th as start and end dates, the supporting documentation shows that the bulk of the $2,445.45 cost of travel was for flights between Toronto and Thailand, with stopovers in Hong Kong and Tokyo, beginning January 1st and ending January 23rd.

Brown seems to have spent some of his time in Thailand playing hockey:


Meanwhile, back in Barrie, Brown's office put out a press release, dated January 8, 2014 suggesting that Brown was in Barrie consulting with his constituents about the federal budget:


“Consulting directly with Canadians is an integral part of the budget process. Many of the ideas brought forward in years past during these local pre-budget consultations have been included in the actual federal budget. Today’s consultation included leaders from the small business community, financial services, education, healthcare, non-profit groups and MP Andrew Saxton, Parliamentary Secretary to the Minister of Finance. We had an excellent discussion with many topics covered and good suggestions made. I look forward to hearing further feedback.” added MP Brown


It must be challenging to consult 'directly' at 'local' pre-budget consultations in Barrie when you're halfway around the world.

For an MP who promotes himself as a tireless constituency politician, Brown has somehow managed to fit in 150 days spent on travel outside the country.

When Brown was a member of Barrie's city council, he seemed to be against this kind of thing:

"It began when Ald. Steve Trotter took considerable exception to the wording of Ald. Patrick Brown's newsletter, which criticized the visit Trotter and Mayor Jim Perri made last spring to Germany. Council approved and paid for Perri's visit to Zweibrucken, Barrie's twin city, which was celebrating its 650th birthday. Trotter said the newsletter implied he had gone on the taxpayers' tab, which is untrue. Trotter noted that, since being elected in 1994, he has not billed city taxpayers one penny for expenses. Brown said he disagreed in principle with sending any local politicians outside Canada on "a vacation." No wonder, he said, that his generation of Canadians (early 20s) have so little respect for politicians. Trotter said every generation dislikes "politicians who misrepresent the truth." -- Petty Politics, The Barrie Examiner, Sep. 18, 2002


When one looks at that long list of sponsored trips and considers how Brown attempted to expense a weekend 'vacation' he spent in New York City in November of 2013 to the taxpayer, it seems his opposition to the principle of sending politicians outside Canada on 'vacations', whether it's his 'sponsors' picking up the tab, or the taxpayer, has diminished considerably.
Posted by robert_viera at 8:01 PM