In a photo submitted to The Brown Retort, Snover Dhillon, a criminally convicted supporter of Barrie MP Patrick Brown, is pictured at the opening of Brown's provincial leadership campaign headquarters in Brampton.

The above photo inset (highlighted in red) is part of the larger photo below ... 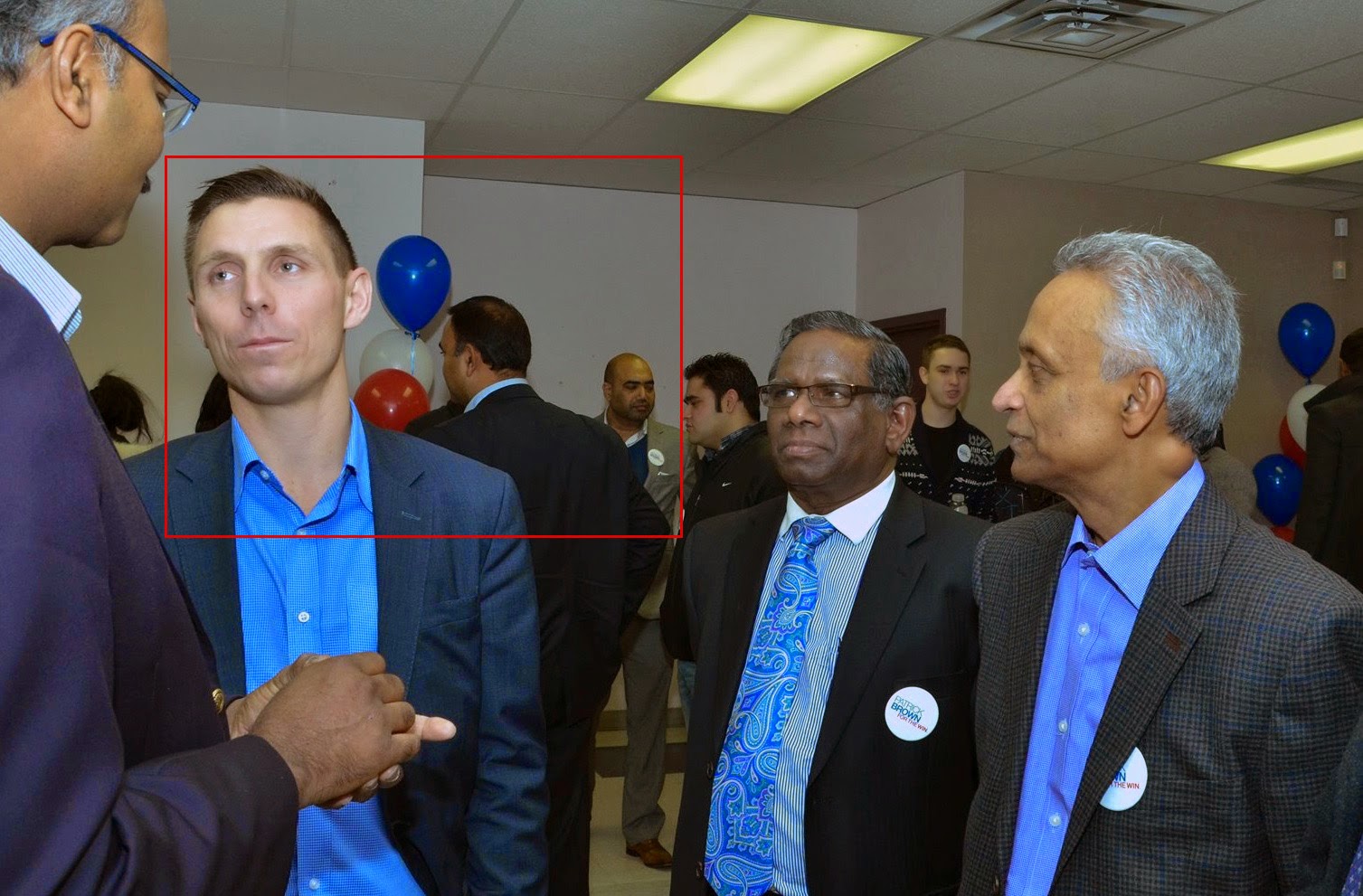 Snover Dhillon came to the attention of the national media during the 2011 federal election campaign when he was spotted sitting behind Conservative Party leader Stephen Harper's family at a rally in Brampton despite facing a criminal fraud charge for allegedly withdrawing $10,972 from a woman's credit and debit cards.

Prior to the March 27, 2011 rally in Brampton, Dhillon had accompanied Patrick Brown to an event in Fatehgarh Sahib, near Chandigarh, India, despite a bail condition, set in December 2010,  requiring that Dhillon not leave the province of Ontario. A receipt included with Brown's Public Statement of Sponsored Travel for his 2011 trip to India has the name of Dhillon's organization, the Indo Canadian Peace Alliance,  handwritten on it, suggesting Dhillon paid for Brown's flights from Goa to Chandigarh.

Indo Canadian Peace Alliance is not listed among the sponsors of the 2011 trip in Brown's Public Statement of Sponsored Travel. Dhillon's organization had previously paid for a 2007 trip to India for Brown, his sister, and two other Conservative MPs.


Early in February 2011, Brown and Dhillon also traveled to Halifax, Nova Scotia to attend the annual general meeting of the PC Party of Nova Scotia. Photos from the meeting show Brown sitting between Dhillon and then Industry Minister Tony Clement.

Dhillon was charged for breaching the conditions of his bail. Although Brown's father is a criminal defense lawyer in Brampton, Patrick has said that he was unaware of Dhillon's fraud charge and bail conditions. Patrick Brown's provincial campaign headquarters, at 205 County Court Blvd, was his father's former law office and is located next to the courthouse in Brampton.

Although Brown has not denied that he and Dhillon were friends, saying "I just wouldn't want to characterize it any way; I wouldn't want to say friend or not friend", Brown said that he would keep his distance from the accused fraudster:


"I like to be supportive of anyone, but obviously I wouldn't be supportive of any conduct that is illegal, and I've got no patience for any conduct that's illegal, but having said that, you're the first one to tell me there's something inappropriate in his past. If that's the case, I'll obviously keep my distance." -- Apr. 07 2011, The Canadian Press

“He has not participated in my campaign. We instructed him given the charges, which came to light (Thursday), that he is not welcome to volunteer here in Barrie,” Brown said. -- Apr 11, 2011, Barrie Advance

“Obviously, I don't support any illegal activity and no one is permitted to participate in our campaign that has been charged of a crime.” -- Apr 11, 2011, Barrie Advance

A notice on the website of the Real Estate Council of Ontario states that, in addition to his criminal conviction, Dhillon plead guilty to a charge under the Real Estate and Business Brokers Act
In March 2014, the Financial Services Commission of Ontario issued a notice warning the public that Dhillon and his firm 'D Consulting Group' were placing ads on Kijiji but are not licensed to do mortgage brokering business in Ontario. The notice advises consumers to 'exercise caution if they are contacted by anyone with this contact information, or matching this description.'

The Canada India Times, which lists 'Sam' Dhillon (one of the names Snover Dhillon uses) as it's editor in chief, features an interview with Patrick Brown in it's June 2014 issue. A posting on a Facebook page for Canada India Times dated June 30, 2014 advertises an article by 'Sam' Dhillon about Brown's bid for the Ontario PC Party leadership.

A post dated August 14, 2014 on the same Facebook page proclaims 'Canada India Times Sponsers Hockey Night In Barrie , Canada' and includes a photo showing the ice at the Barrie Molson Centre with a Canada India Times ad on the boards in the distance. Hockey Night in Barrie is a fundraiser for the local hospital held at the Barrie Molson Centre that Patrick Brown took control of in 2008 and has attached his name to every year since.

In a video of Patrick Brown's September 28 2014 announcement that he would be a candidate for the Ontario PC Party leadership, held at the Southshore Centre in Barrie, Snover Dhillon can be seen coming up to Brown after the announcement and placing his hand on Brown's shoulder, at which point Brown turns to Dhillon. Several frames from the video are displayed below with Brown and Dhillon highlighted by removing the colour from the rest of the frame.