First, allow me to apologize to readers of this blog for not posting any new content here in two-and-a-half years.

I've taken to posting comments on the websites of Barrie's local newspapers, The Barrie Examiner, and to a lesser degree, The Barrie Advance, and that is what has brought me back here today.

I posted a comment to a Barrie Examiner article about Barrie MP Patrick Brown's announcement of federal funding for the Lampman Lane Community Centre.

My comment alerted online readers of the Examiner to another announcement of federal funding made by Patrick Brown just days before, but this announcement wasn't made in Brown's constituency of Barrie.

Brown's announcement of $460,350 of federal funding through the Community Infrastructure Improvement Fund was made at the hockey arena of St. Michael's College School, a private all-boys school in Toronto which Brown attended. 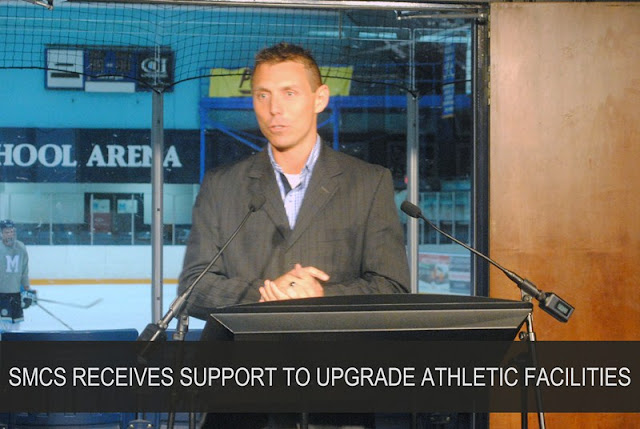 Additional details about the announcement can be found in this North York Mirror article.

In my comment, I drew attention to the fact that St. Michael's College School requires in excess of $17,000 in annual tuition and fees, plus a one-time 'capital improvement' fee of $3,500 for 'new families'.

I was rather surprised to see an exclusive private school getting financial assistance from the federal government, so I decided to check out the eligibility requirements for funding under the Community Infrastructure Improvement Fund.

In order to be an eligible recipient under CIIF, St. Michael's would need to be a not-for-profit entity. I conducted a search of federal corporations and found a 'ST. MICHAEL'S COLLEGE HIGH SCHOOL FOUNDATION'. Other than the word 'foundation' in the name, there was no indication as to whether this was a non-for-profit corporation. The 'Type of Corporation' was listed as Not Available.

Not satisfied with the information I had found in the federal corporation search, I decided to query the Canada Revenue Agency's database of charitable organizations.
This search turned up the same 'ST. MICHAEL'S COLLEGE HIGH SCHOOL FOUNDATION' I had found in the previous search, but this time the results were much more informative. I clicked on the link to display the foundation's 2012 Registered Charity Information Return. 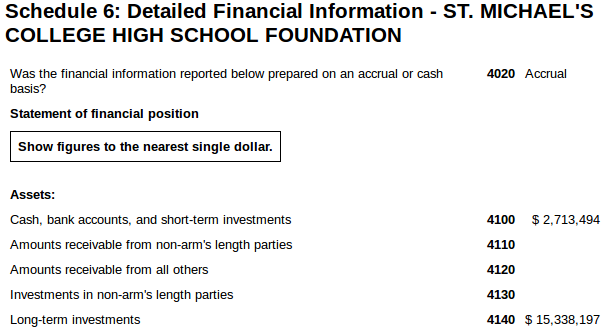 As you can see, with 'cash, bank accounts, and short-term investments' of $2.7 million and long-term investments of $15.3 million, it would seem that the school is not without considerable financial resources.

Schedule 6 also lists the foundation's revenue, which in 2012 included exactly $1 million in tax-receipted donations and $638 thousand in investment income.

'St. Michael College School High School Foundation' seems to have gotten it's start in 2006 when it received a donation of $18 million dollars from another registered charity, 'ST. MICHAEL'S COLLEGE SCHOOL'. 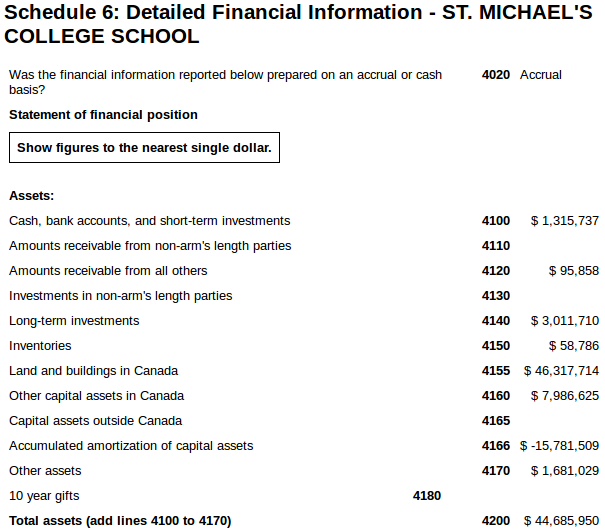 All of this begs the question, why is the federal Conservative government, which has been cutting services to Canadians of modest means in the name of eliminating the deficit, handing out the better part of half a million dollars to an exclusive boys-only private school for the children of the well-heeled in Toronto?

What do you have to say on behalf of your government, to your constituents in Barrie who have been affected by cuts to government services, Mr. Brown?

Here is Brown's comment on the federal funding to the North York Mirror:

“I think it’s a worthwhile investment”

You can let Mr. Brown know whether you think this funding is a worthwhile investment of your federal tax dollars by clicking on the 'Comments and Reactions' link at the bottom of this post.

UPDATE: Another article has been published which includes the following comments by Patrick Brown:

“I represent Barrie, but I know what St, Mike’s does for this area,” said Brown, at the ceremony Jan. 25. “I thought it would be a worthwhile cause to rally behind.

“The rink hasn’t changed at all since I was here in ’97, you could see why there are upgrades required...


The school's website seems to contradict Mr. Brown, describing the arena as 'state-of-the-art'.

Here's a nice satellite photo of the facilities at St. Michael's.

The building in the middle is the St. Michael's hockey arena where Patrick Brown made the funding announcement.

Now here's a satellite photo showing how close these facilities are to Mr. Brown's parent's house, marked with an 'A' in the photo below.

Using a scale on the map, I estimated the distance to be about 600 meters.

Getting back to where I started, the comment I posted to the Barrie Examiner article has disappeared, I suspect as a result of a private complaint by Mr. Brown or one of his supporters.

I made a comment to a similar article on the website of The Barrie Advance and when I returned to their website today, I found that a duplicate article had been created, minus the comment I had made on the earlier article, so I went ahead and commented on that article too.

I'd like to dedicate this post to the person or persons who had my comment removed from the Barrie Examiner article. I would not have taken the time to make this post were it not for you.
Posted by robert_viera at 1:41 AM